Why you couldn't buy Tomorrowland tickets (and we got to buy over 800!)

If you're not an IT professional, your chances of buying tickets for Tomorrowland are far from great. I've been trying to get my hands on them "the normal way" for 5 years now, but like most of you I didn't succeed and end up frustrated as f#ck.

As a few people demonstrated in the past (link) there was a trick that increased your chances of obtaining tickets by timing your page requests just right. As I was decompiling this years' waiting queue I noticed Paylogic added a random factor that renders this trick useless.

As soon as all tickets were sold out at the pre-sale last Saturday I decided to ask my equally nerdy friend Roeland for help and go FULL ON the next time tickets would go on sale and this is what we did:


We installed a virtual machines and copied it 253 times on a total of 8 high-end servers with an extremely fast internet connection. Then wrote a script that would do the following at startup on each virtual machine:


For the normal people that have no idea what I've described above, an easy explanation: What we have done is NOT hacking or illegal. It's like asking 254 of your closest friends and family members to pre-register and give them an atomic synchronized wristwatch and superhuman speed to time their visit to the queue within the millisecond and let them buy tickets for you. All we've done is replace the friends and family members with a few computers and a couple lines of code.

As a geek I don't have that many friends, so this is a great tool for me. In fact, I might use this setup at my next birthday party, so I don't have to cry and eat cake alone... like a looser. 😀


This setup was created in a few hours (less than 5) and can easily be expanded to a couple of thousand machines as long as you have access to enough server power.


We are not the only geeks in the world that know how to do this and have access to a couple of servers. This is probably the reason most of us never managed to get tickets.

We are not going to use this setup to make money by reselling the tickets. We hate the people that do. In fact; I only need two tickets for me and my sister. I just want to tell you and the people at Tomorrowland and Paylogic to fix these abusable loopholes.

If you are one of those tech nerds that abuses their skills and resources to make money by reselling concert and festival tickets; go find a real job. There are loads of good paying jobs for people like you that don't involve screwing people over. You have a talent, don't waste and abuse it.

So, how can Tomorrowland avoid this?


This is relatively easy: In the future avoid using the online waiting line. Just randomly select people that pre-registered to buy tickets. Randomly give a couple of thousand people access to the ticket store for a few days to buy a maximum of 4 tickets. After that another couple of thousand and so on until there are no tickets left. I would suggest a maximum of 1 pre-registered link per physical address that must be used as the address the tickets would be sent to. This to avoid script kiddies to use randomly generated email addresses to get a higher chance of being selected. Doing the above gives everyone the same chance of enjoying the wonder of Tomorrowland.

If you agree and want to let Tomorrowland know you do, please share this blog on Social Media. Good luck to everyone at 17:00!


Just over 30 minutes and more than 200 virtual machines got through and we bought 4 tickets (we could have bought over 800 tickets!). 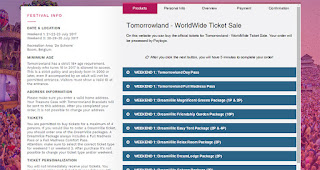 This proves my point that the system is flawed and in need of an upgrade. Nevertheless I am really excited to finaly go to Tomorrowland! If you managed to get through and order tickets I will see you there!

Freddie
Email ThisBlogThis!Share to TwitterShare to FacebookShare to Pinterest